The Ukrainian people need immediate help now. This is why we will donate 1 EUR from every admission fee. All guests on our guest list are requested to pay 5 EUR as a contribution to this donation. In addition, there is a donation pot for all guests at the box office. The raised funds will be split equally between Ukraine Humanitarian Fund and Ukraine-Hilfe Berlin e.V.. Let us stand together, this madness must end!

Covid-19 restrictions will be lifted from the 1st of April, Covid Pass or testing will no longer be required. However, in order to protect our guests and our community, we encourage all participants to test themselves before entering.

Atom™️ (also known as Atom Heart, real name Uwe Schmidt) is often regarded as the father of electrolatino, electro gospel and aciton (acid-reggaeton) music. With a history of impressive pioneer for A/V and the curation of 1,500 titles and over 150 revisited albums, the presentation of his new live performance (and upcoming album) »Neuer Mensch« will be legendary.

Sound nerd & visual artist Albert van Abbe has just about covered the whole field of electronic music over the course of the last 21 years; from minimalistic sound installations to uncompromising Hardcore Acid productions, a long list of collaborative works, institutional partnerships and public projects with artists of various mediums add to an exciting list of performances both inside and outside the club. The latest edition to his oeuvre are »Dual«, are collaborative impro release together with Byetone, as well as »Nondual«, his new solo record and A/V live performance, both released on raster.

Yanling is stubborn. - The Hong Kong native emerged in Berlin‘s left-field dance scene pushing a unique approach to a bass heavy sound, traversing an abundance of textures and hard-hitting club rhythms; inspired by early grime and uptempo techno at a time when that mix of sounds had few admirers. Yanling’s DJ sets find her mixing cyber techno with dazzling incursions of electro and gliding breakbeats including tribal elements. Since early 2018, she has been a resident of the Forbidden Planet Records where she has pushed a corporal sound characterized by jagged mixes and an uncompromising focus on the dance floor. She showcases her music across transcontinental clubs, alongside soundtracking various projects.

Raster. Alphabet is a new bimonthly event series in collaboration with RSO Berlin. Every two months raster will curate a lineup of live A/V shows dedicated to the ABC. The series is meant to be an experimental contribution to the vibrant Berlin club scene. Further dates: June 30, August 25, October 27, December 22, and more to be announced. 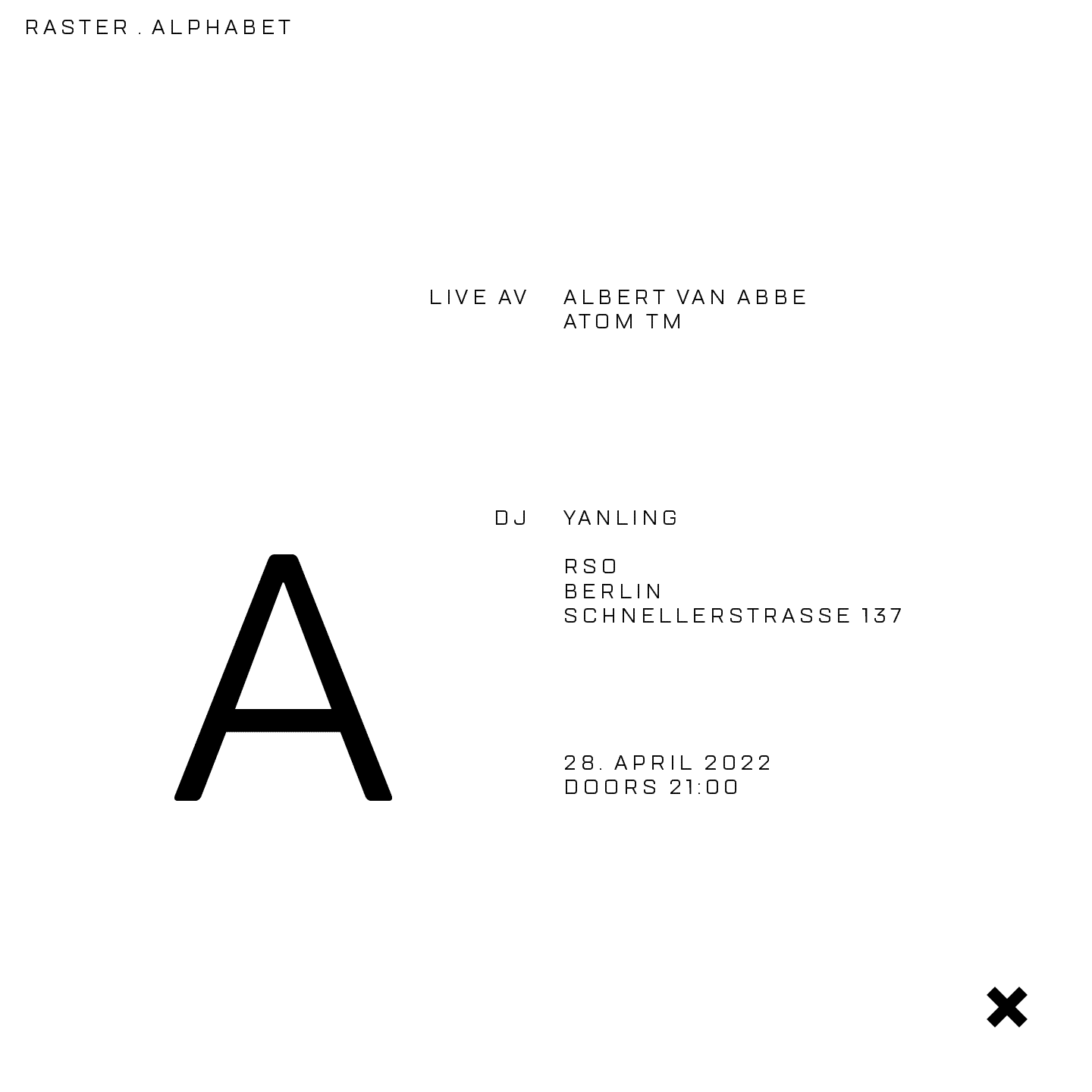